First up, as I have been doing every post for some time now, I have gone back and fixed another month's worth of earlier posts. In this case, it's August of 2013. That month featured four posts, including a couple of Vietnam related efforts on Tin Pan Alley which were sent to me, the longest song-poem I've ever heard, on Halmark, a two-artist release on the tiny Spa Records label, and a swinging record on one of the earlier labels, Arco Records.

Next up, here is another in the collection of ads found for us by Brian Kramp, this one from Virginia: 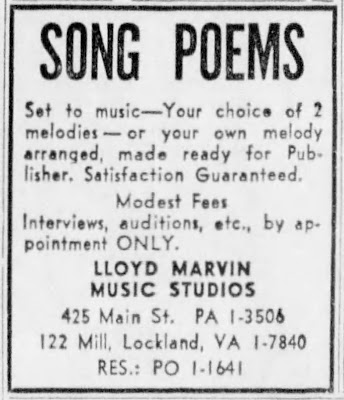 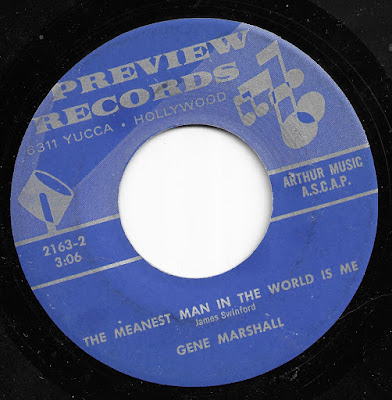 Now if you've ever seen the Song-Poem documentary, "Off the Charts", you've seen an interview with Gene Marshall, and you've also seen him in the studio. One word that wouldn't seem to apply to him is "Mean". And yet here we have a mouthful of a title, "The Meanest Man in the World is Me", with Gene singing his heart out, performing lyrics which certainly indicate that the protagonist of the song would at least compete for such a title.

This one is full of fun, unexpected lines, funny and weird enough that I'd really rather not give away the pleasure of experiencing them for the first time, aside from that wonderful quote in the title. So, without further ado, here's some epic meanness:

Download: Gene Marshall - The Meanest Man in the World is Me
Play:

On the flip side, we have a record with as timely a title for today's crisis as I can imagine, "When You Call Your Doctor". However, this is 150 complaint about sitting for far too long in the waiting room, with a bit of a punchline built in. I wonder how many other songs have ever been written about having to wait for the doctor?

Download: Gene Marshall - When You Call Your Doctor
Play: 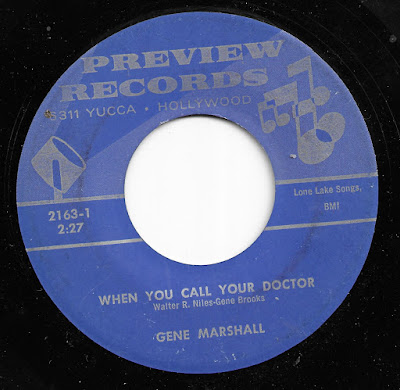