Where They Use Their Bodies, Not Just For a Hobby!

Okay, so first up, in my ongoing goal of re-upping all of the old posts, I have now cleaned up the four posts I made in November of 2014. That month featured a ridiculous Mike Thomas record on Tin Pan Alley, a back-to-back series of two posts featuring Halmark-styled releases from the same company, prior to it being called "Halmark", and a sleazy record from Gene Marshall. You can find them, in that order, right here. 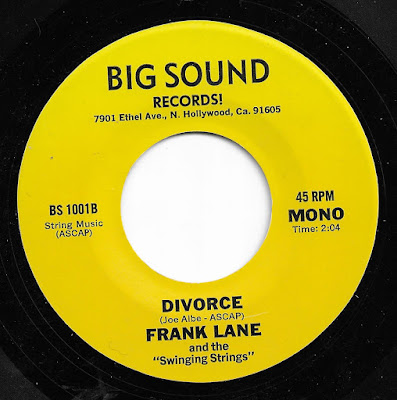 Continuing something I said in the last post, I'm still not finding much time to do anything that I don't have to do (although that should change soon), so I'm not going to blather on about today's record. I'm sure there are at least some readers who don't go in for my lengthier posts anyway.

So I just bought this ridiculous and very poorly pressed record, a late-era offshoot of Film City on the Big Sound Records label (the only one I've ever seen on that label), and I enjoyed the lyrics on both sides of the record, despite the terrible sound and uninspired performances. The songs are credited to Frank Lane, who I suspect is Frank Perry, but I'm not sure.

First up, here's a song decrying all the bad things about "Divorce", featuring the line I quoted for the name of this post:

And on the other side, an equally busy Chamberlin track backs up Frank Lane, again, on the saga of "Rodeo Joe", about as half-assed as a lyric and performance as I can imagine: 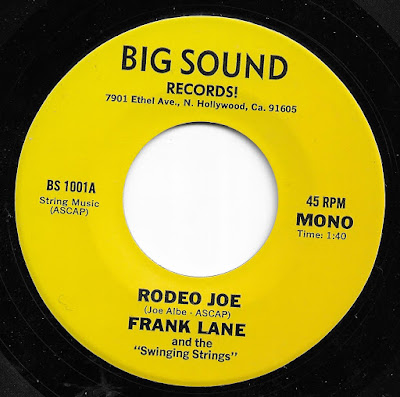 I assume Rodd is on both sides--the keyboard playing sounds like him.

The over-specific lyrics on "Divorce" are really a howl, and the whole thing is kind of catchy. As far as "Rodeo Joe," my favorite thing is the weird bassy sound that briefly shows up about halfway through. THAT's weird!

Thanks for posting these!!

We may have reached a new low with this great duo of scratchy tunes! Thanx Bob, for unearthing this 45.