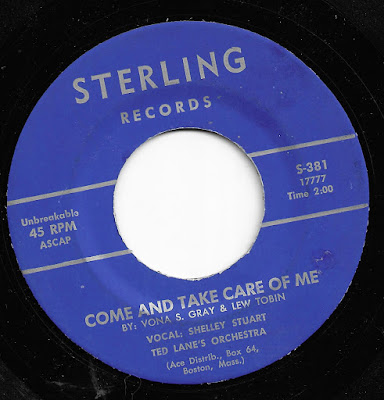 I get a kick out of today's billing, and that's what's referenced in the name of this post. More on that just below. But first, I am featuring today one of the singers at the Sterling label, who hasn't been featured enough (because she's not on that many records, and because I have even fewer than that), Shelley Stuart. I have consistently - during three other posts feature her work - misspelled her name as Shelly, despite the fact that the correct spelling was clearly evident on the labels of all three records featured in those posts. I hope to fix those posts, or at least the labels, soon.

Anyway, in this case, Shelley has a peppy, pleading number to sing, titled "Come and Take Care of Me". She is accompanied (as is the case with her label mate on the flip side), by "Ted Lane's Orchestra", a combo which shows up infrequently enough on Sterling records that it is not found on any of the records indexed on the Sterling page of the song-poem website. But here's the thing: You'd be hard pressed to find anyone who can tell the different between Ted's band and Lew Tobin's ensemble, which is usually credited (if a backing "orchestra" is identified at all. This is clearly the same band. So what's the story there? I recognize that I may well be the only person who cares.

On the flip side is everyone's favorite Norm, Norm Burns, here going by the more formal Norman Burns, backed again by Ted and the boys, led off by a loping and appealing guitar introduction, and then going into a tune, "Little Butterfly", that is completely in Norm(an)'s wheel house. It's fairly slight, but his vocal is appealing,and I sure do like that repeating guitar phrase. 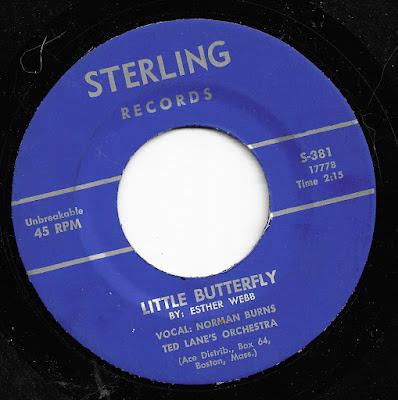 I really dig both of these. Thanks for posting!

Perhaps prospective s-p buyers were given the option of having the billing be a singer AND a band, or just a singer.

Sometimes I also wonder if the song-poets could pay more and get a full, rather than partial, songwriting credit.

Yessum's... BOTH these two completely different sides are winners.