﻿
Man, I have genuinely lost track of time. I had no idea I hadn't posted in over two weeks. I need to get back into a rhythm.
Before I get to today's feature, I want to share that the date for the obnoxiously racist Halmark release featured two weeks ago has been identified as 1969. Please see the comments to my previous post for details; I have updated the post.
﻿ 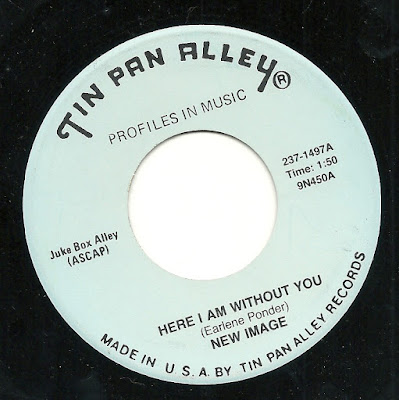 I have often found the late-era Tin Pan Alley efforts by the band called "New Image" to be half-assed in a usually uninteresting, occasionally entertaining way. But here's one I actually like as a record. It still has that oompah feeling heard on so many TPA records of the '70's and later, but in this case, the loping beat, the stripped down backing and the pleading vocalist fit the lyrics nicely, and.... I dunno, the whole thing "works" for me, even while I recognize that it's got bargain basement lyrics and a garage demo level backing. It's also over in just 106 seconds, so there's barely a welcome to be worn out. It's called "Here I Am Without You", and here it is:

Download: New Image - Here I Am Without You
Play:

But, as I find myself saying quite often, the flip side - I Want to Be the One - does not do it for me, despite being in the sort of '50's setting that would often appeal to me. I find myself tuning out, not caring much about the lyrics or the performance.

Download: New Image - I Want to Be the One
Play: 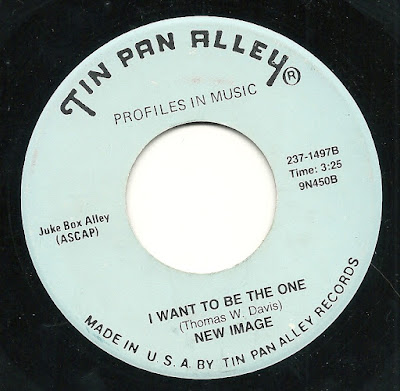 I track with you here. (Get it?) The a-side is a strong vocal performance and it is indeed peppy. The flip's just dull. When do you think these date from? Thanks for posting!

Not bad... I think this lead vocalist is a fantastic talent. The band could use some advanced training. Also, the flip side sounds like the 45 disc center is way off or perhaps warped.