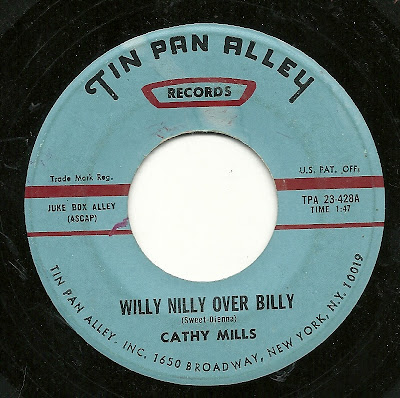 For the first time in a while, I'm introducing a new name to this series, a singer not previously heard from in my ongoing review of song-poems. It's Cathy Mills, whose work turned up for a brief period around 1966-67 on the Tin Pan Alley label. All of her work that I've been able to find documented occurs within a span of less than 100 release numbers on TPA.

This is a nice one, featuring the goofy word play which seems to have been endemic to people who bought into Tin Pan Alley's deal (i.e. "Fine Cars, Fine Cigars", "Doggone! My Dog is Gone" "Right, Right, Right the Wrong", and too many lyrical couplets to mention). "Willy Nilly Over Billy" also has the garage-lite sound that make so many of TPA's records from this era so pleasantly weird (or weirdly pleasant) to experience.

Cathy Mills has a sweet, engaging voice, which makes me wish that she turned up on more of these records than she does.

(Of course, some reader may now let me know that Cathy is heard, on another label, under another name, making a connection that I'm perhaps missing...)

The flip side, "Find the Way to My Heart", is, as you'll hear, beat to hell. I started trying to fix the clicks and pops, but the results were almost as bad as the unfixed version, and I eventually gave up, part of the reason being that the song didn't strike me as anything special at all. 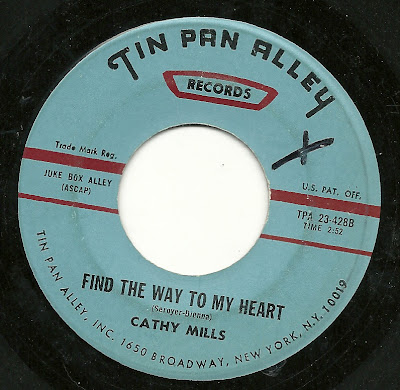 Finally, today would have been mom's 89th birthday, and I hope that somewhere out there, she's celebrating.
Posted by Bob Purse at 9:56 PM

"I'm willy-nilly over Billyyyyy,
Although these rhymes are really sillyyyyy"

Anyway, I don't think this is from Rodd Keith, is it? I mean, Broadway is about 3,000 miles too far away for this to be Rodd.
Come to think of it, Cathy Mills is about 3,000 miles too far from Bobbi - I wanna say Blake, but I guess she was still going by Boyle at the time - for it to be her, either, but the similarity to pre-disco Bobbi is there. So who knows?
Did any song-poems get recorded in Hollywood and released in New York? Who knows, but one of the biggest song-poem coincidences if we're both not right.