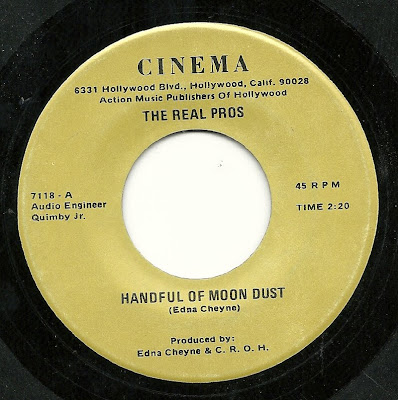 While every record I've ever seen on the Cinema label features a generic group called "The Real Pros", most of these records actually feature the usual suspects from the Los Angeles song-poem world - Rodd Keith, Dick Kent, Bobbi Blake and the rest. Actual, REAL pros.

But it's the earliest Cinema releases that fascinate me. While containing that same group name, these actually feature what appears to be a one-man-band, or at least a single keyboardist and a singer. The keyboard is one of those ubiquitous early '70's models that the family down the street always had in their living room. They had pre-programmed drum tracks, and if you pushed down a couple of keys at the left end, you had a chord background for your song. More talented pianists could actually use the drumbeats and play an entire left-and-right handed song.

For a moment, anyway, these keyboards seem to have been acceptable for use on major label record releases - at least if the sparkling review that Billboard gave to Robin Gibb's embarrassingly amateur first album (which has this sort of keyboard all over it), in 1970, can be believed. I've even noted what I believe to be one of these keyboards on a Leonard Cohen album or two.

Whoever played on these early Cinema releases knew how to get the most out of the limited machinery, as evidenced by the uniquely weird "Deep Freeze Mama", and the downright wonderful "I'm Having My First Heartbreak". But my real question is: who was the singer on these records? It appears to be the same guy on all of them, or at least a few guys with the same vocal qualities. I don't think I've ever heard it on any other label's song poems. Despite his sort of loungy qualities, I tend to enjoy this singer.

All that is a long set up to yet another Astronaut record, "Handful of Moon Dust", one whose lyrics are unusual in that they are from the point of view of a homesick Astronaut, who is glad to be back on Mother Earth.

The opening to the flip side "Until You Change Your Ways" sounds particularly like a few tracks on that Robin Gibb record I referenced. I don't have much more to say about this offering, aside from noting that both of these sides bear a production credit to "Quimby, Jr.", which I don't think I've noticed on Cinema records before, although I now see that it's on at least a few other early records from the label. Does this mean that the label was initially linked to the legendary Tropical label, run by Robert Quimby? There's nothing on the song-poem website to suggest this, but still, ooh, it makes me wonder.... 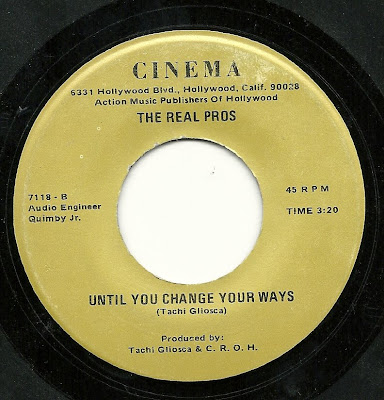 Oh, her mountains are purple...