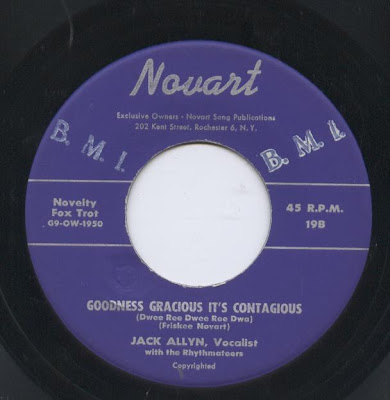 Every once in a long while, during my song-poem collecting life, there comes the opportunity to buy a record I never thought I'd see a copy of, let alone own. This happened this week, when I stumbled across a copy of a record on the Novart label for sale. Not only that, but there's an oddity about the record's credits, as well.

During my first few years of collecting, I did a lot of tape exchanges with song-poem guru Phil Milstein. At one point, he sent me a cassette with a selection of particularly odd examples of song-poems, and named the tape after one of the oddest of the tracks, "Goodness Gracious It's Contagious (Dwee Ree Dwee Ree Dwa)" by Jack Allyn, Vocalist with the Rhythmateers.

According to the song-poem website, this song has been found on what I suspect was a 78 release (since it was dated 1948), and on an undated album. This version is on a 45, but it's the same version I'd previous heard (although in somewhat better quality).

Anyway, this is an all time favorite of mine, and being able to own a copy of this one is the sort of thing that makes collecting as fun as it is. I love the insane amount of echo here, the 1920's sound permeating the disc, and the completely ridiculous lyrics. Although, again, these would have fit in, and perhaps with a little tweaking, have even been a hit, in the 1920's - 30 years earlier!

Here's the weirdest thing, though. Nearly every song listed on the Novart page at the song-poem website shows the songs to have been written by George Franciosa, Sr. Both songs on this 45, however, are credited to the utterly fantastically named "Friskee Novart"!

Here's the A side:

The B-side, by the same clunkily named ensemble, is not nearly as interesting to me, but still, worth a listen. It's called "How Can I Make You Care For Me?: 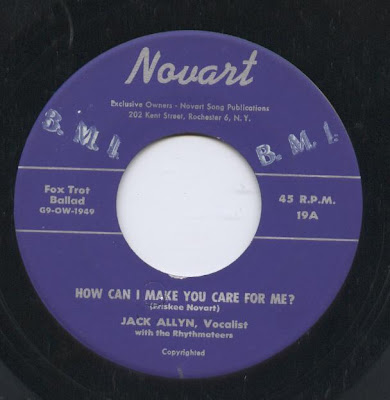