What He Ain't Got 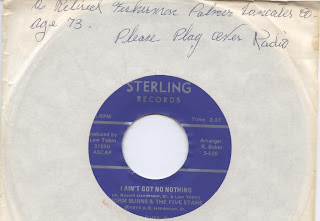 I thought I'd include in today's posting a scan of the sleeve that was on this single when I bought it. While I'm not sure it originally went with this record, I am sure that it was originally attached to a song-poem, given the nature of the text written on it. I'm not sure about this, but I think it reads (with the addition of a few commas):

Assuming it refers to one of these songs, I'll guess it's the one I'm sharing first. Here's Norm Burns and the Five Stars with "I Ain't Got No Nothing". I greatly enjoy these lyrics, which are just short of idiotic, except one line which (at least to me) comes out of nowhere and has me saying "WHAT?" every time:

The flip side (the same combo with "Gonna Keep You Warm") is not as off the wall, but it does have a somewhat interesting chord progression and melody (mostly in the chorus), and that ringing guitar sound, a sound I often love on these Sterling records, even though I just as often can't stand a similar sound on a lot of mid 1960's hit records. THe lead vocal here, on the other hand, has to take its place among Norm Burns' worst. 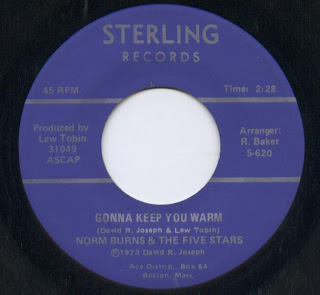 "Ain't Got no Nothin'" is aggressively stupid, but that last line is a keeper.