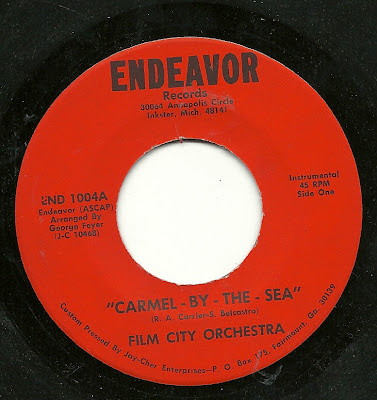 Here's something quite unusual - in fact, I'm only aware of a few examples of each of two unusual facts regarding today's featured record. The first is that it came with a picture sleeve - I mentioned owning two a few weeks ago, when I posted the other one which I own, and I've since been reminded that a few other song-poems came with picture The other thing is that one of the songs is an instrumental.
There are very few song-poem records with instrumental tracks that I'm aware of, one of them being the marvelous "Elmer 21 Century Hop", which was included on the first Rodd Keith compilation. Like that track, today's offering comes from the Film City factory (although the record itself appeared on the smaller Endeavor label), and is in fact credited to "Film City Orchestra". Like "Elmer", what we have here is a chance to hear the Chamberlin played as a solo instrument, with every sound on this record created on that most wondrous of instruments.
There's no way to know who played this piece for certain. It sounds a bit simplistic for Rodd Keith, but on the other hand, who else was making Film City tracks at the time? And perhaps it sounds so simple because the author of the instrumental (titled "Carmel-By-The-Sea") wrote a simple tune. Whatever the story, it's certainly a fascinating little record, and here it is:
Here are both sides of that picture sleeve: 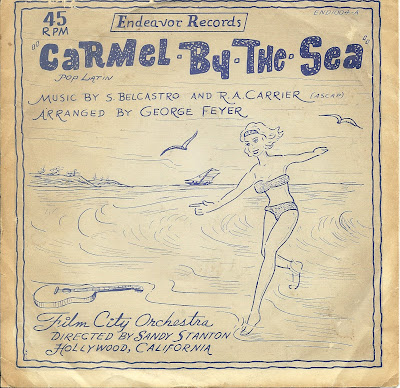 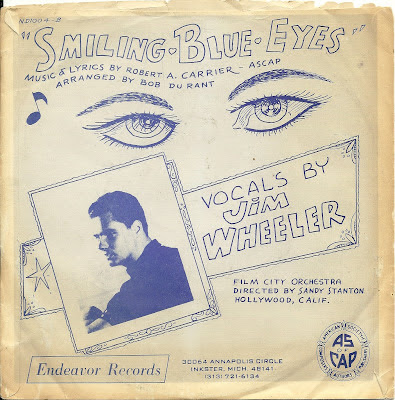 ﻿The flip side is pretty much a standard-issue Film City style ballad, with the lead singer (as seen above) by moody, handsome JIM WHEELER!!!. Here' s "Smiling Blue Eyes": 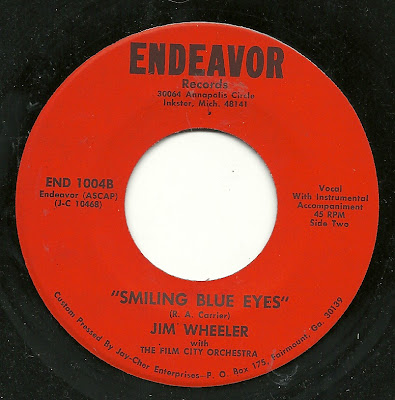 Luv UR blog. I agree, it doesn't sound like Rodd, and the names don't sound like pseudonyms. I read somewhere that Sandy Stanton had a Chamberlin, so there must've been someone other than Rodd to play it, but you never know, his earlier recordings do seem rather tame, which makes sense when you consider the personal transformations he went thru.

What a score! A song-poem picture sleeve!

After Rodd left, other people definitely manned the Chamberlin (and maybe during his tenure as well)...the Jim Wheeler titles seem to be from this later period

Also, I know of another Film City instrumental, "Danza Graciosca", I'll send that to you soon!!

As if in answer to the question I posed last week, a song-poem record that got from Hollywood to Michigan - by way of Georgia?
Dang, Now I'm wondering if Ramsey Kearney DID any Previews?

Jim Wheeler! The "What I Like" Jim Wheeler?? Wow!